A Turtle Made Me Do It

by Capt. Jim Barr on 12/16/17
I'm a reasonably good swimmer but I never learned to swim "the right way", that is with the crawl or freestyle stroke using rotational breathing. I can do the breast stroke, the backstroke, and I can freestyle but I have to keep my head up, looking straight ahead. Unlike many friends, I learned how to swim in a lake, not in a swimming pool. As a teenager I would sometimes swim at night across sections of the lake we lived on, it would drive my mother crazy. Later, during college days I recall one pitch black summer night when a few of my buddies and I swam from shore to a nearby island where friends were tenting and sitting by the campfire. We didn't know about Navy Seals in those days but we could have perhaps passed as special ops frogmen. After we silently swam across the lake and through a muddy cove, we waded ashore, we covered ourselves in mud and lake weeds, then spread out, and snuck up on these guys- scaring the holy shit out of them. After lots of laughter and a few beers, we returned to the water and swam back to where our car was parked. As the lead swimmer and with my head out of the water I maintained the proper bearing so we arrived on target.
There's a reason I swim with my head above water, our lake was full of tree stumps, brush piles and big snapping turtles, but despite these hazards I was very comfortable in these surroundings. Swimming in a chlorinated pool (had it been an option) didn't do it for me. One reason was there were no largemouth bass in swimming pools, and I was an avid largemouth bass fisherman. One of my secrets for success in locating big largemouth bass is that I would don a dive mask, snorkel and fins and search for bass in the heavy cover of the brush piles, tree stumps, docks and muddy coves that were loaded with lily pads.
As a kid we always lived near water and my family would "maintain" a small fleet of leaky wooden boats complete with cantankerous small outboard engines that were always breaking down. I got pretty handy with a wrench and screwdriver just enough to keep them running most of the time, however a strong set of oars, a supply of shear pins, and a bailing can were oftentimes vital in returning home after a day or evening on the water. So, after scouting prime largemouth bass water as a "Navy Seal in training", I would return and catch those fish with my cheapo spinning rod and black plastic rubber worms and hula poppers. Summertime was dreamy for this country boy.My father was a businessman, an inventor of sorts, a family man for sure, and of course, a fisherman. He was a pattern maker in the Navy during WW2 and no doubt it was this experience that gave rise to him becoming one of the original MacGyver's, the products and processes he would come up with were amazing.  He also had a very keen wit and was a big practical joker. So the following story stars Jim Sr., Jim Jr. (me) and one of my dad's best friends, Johnny Haren. We lived in upstate New York, Schuylerville to be exact. My dad was the operations manager at a paper company in town and Johnny Haren was one of his production supervisors. Johnny was dad's best friend, also a Navy alum, a short guy, kinda pudgy, a bit nervous, quick witted and very talkative, mostly about stupid shit as I recall, and best of all, Johnny was a good fisherman. Anyway, they were quite the pair and when they could find the time, fished together and exaggerated about most everything fishy.We lived in the country, half way between Schuylerville and Saratoga Springs and behind the house were open fields full of woodchucks and arrowheads. Fish Creek (how appropo) bordered these fields. It was a muddy creek full of walleyed pike, pickerel, bass, carp and a variety of panfish... and huge snapping turtles. I was about 10 years old at the time and while fishing from my rowboat (by myself) in a sheltered and shallow mucky cove, I encountered a snapping turtle that must have been damn near two feet across. I had hooked a small bass and the turtle chased it to the boat. Upon returning to the house I told my father the story. After a minute or so, he asked me if I thought I could find that turtle again, and I told him I thought I could. 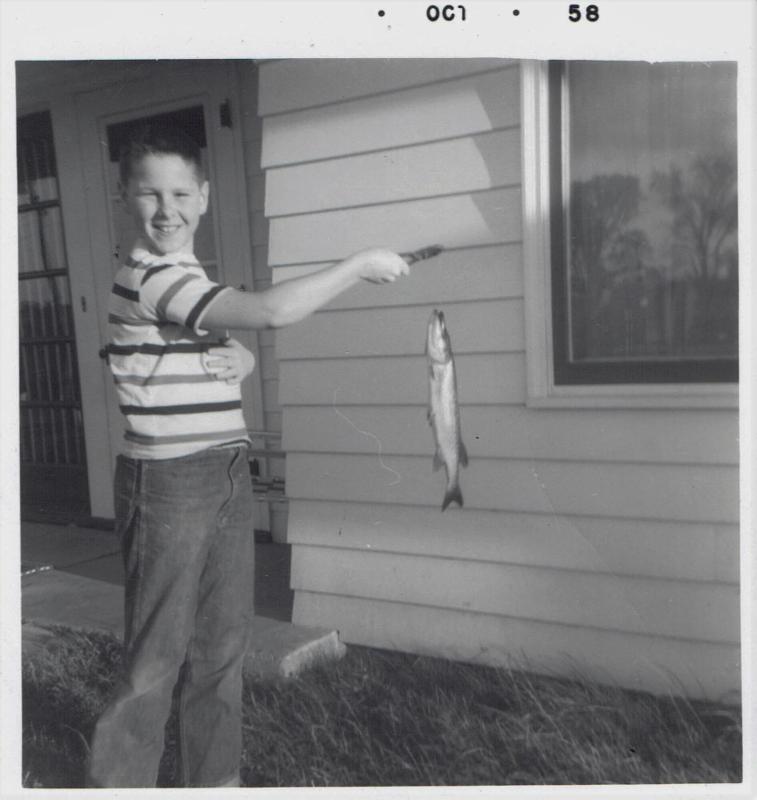 "Let's go get that turtle... get a rope from the garage and the big net".  "Dad, there's no way that turtle will fit in the net, why don't we just leave it alone or maybe kill it, after all it's eating all the fish and probably the ducks too, besides it gives me the creeps!" "Nope" he said, "we're going to catch it!"  "Catch it!... Dad the thing is huge, it bites, it hisses, it's covered in moss and it stinks!""Don't argue with me, go get the big net and a rope in the garage and throw them in the station wagon, and don't tell your mother anything... got it?""Yes sir", I said.Holy shit, I thought to myself, I should have kept my mouth shut. Dad drove the station wagon through the back yard, across the field to the dirt landing where the rowboat was tied up. "Let's go",he said, as he threw the net and rope into the boat and untied it from the tree , "you row!"After ten minutes of rowing the boat and thinking to myself the whole time where this caper was going, we drifted into the cove where the turtle lived. "Pole the boat with an oar to where you last saw that turtle", he directed me. In short order we saw some lily pads moving with the characteristic trail of bubbles coming from the bottom as the turtle was clawing its way through the muck trying to get away from us. As I got closer to the lead bubbles my father rigged a noose with the rope and readied the net. "Get up on top of him and pin him to the bottom with the oar", he commanded.This was about to get real serious, I was convinced my father really didn't appreciate how big this thing was! I was thoroughly confused, my heart raced, I gulped for air, WTF dad! (I thought). But he was all business, determined, kinda crazy. Is this gonna be a turtle soup venture?... no freakin' way I thought. 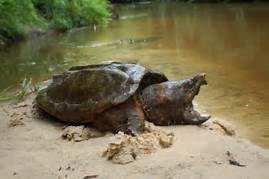 I pushed up on the turtle in about two feet of water, I attempted to pin it to the bottom but missed and hit it on the rear of it's massive shell. Up it came head first, mouth open and hissing. As the boat rocked Dad pushed the net over it's head and one of it's claws. It's jaws crunched into the aluminum net hoop, it's claw became instantly entangled, and now we were fast to this massive, strong, prehistoric and pissed off carnivorous predator.  "Here, you take the net, I'm gonna get a line on a rear claw", my father shouted. The thrashing turtle damn near pulled me out of the boat, while my father deftly lassoed a leg as if he were a cowboy roping a steer. We had him!... or he had us.Now what? I thought. Back to the landing I rowed, with turtle in tow as my father somehow managed to keep it from capsizing our fragile craft. "You take the rope, I'll take the head, and we'll load it into the wagon. "Dad!""Just do it!!"The look on my mother's face was incredulous, if she had a gun~ dad would have been a gonner for sure as we proceeded to unload the turtle into the garage.Dismissing my mother's protests, he ordered me to the shed to get a shovel and the push broom. "Dad!!"... "Stop it, don't worry- we're not going to kill it", he said, "I'm gonna play a joke on Haren!"Upon returning to the now stinking and muddy garage, I discovered that my father had the turtle tied spread-eagle fashion so that it could not move. With the shovel and push broom he cleared the moss, slime and leeches off the shell. "OK, now we're gonna leave this guy here till tomorrow when the shell should be dry", he said.That night mom fixed dinner for just my brother and me, dad was on his own, which seemed cruel at the time but in retrospect, was probably appropriate. Things were a bit tense in the Barr household that night until my father was forced to share his plan with only my mother. She directed him to sleep in the breezeway that night, paying a slight penance for what she perceived as bordering on animal cruelty. After returning from church the next morning my father told me to put on some old clothes and fetch a paint brush and a can of white refrigerator paint from his workshop. "Dad!"... "Just do it" he ordered, with a twisted smile. "I'm gonna fix Haren!"The next day after the paint was sufficiently dry, we retraced the drive to the landing, whereupon I rowed the boat back to the cove with the turtle in tow. Dad cut the turtle free and away it swam into the murky deep.About two weeks later, Dad invited Haren to go fishing with him in Fish Creek. He told Haren he knew of a cove that had some big largemouth bass in it. Haren was excited to try some new water. He was his typical self I was later told, yakkity yak, fidgety, a comment about everyone and everything at the shop... Dad poled the rowboat deep into "Turtle Cove" as it became known in our family. He loved it when his plan came together, as it did that morning. With his best friend in the bow, and the fish biting, on a warm summer Saturday morning, he poled the rowboat into the turtle's lair... alas the same moving lily pads with the trail of bubbles. There it was... Haren stared into the water in utter disbelief. Dad related the story at our dinner table that night... I remember his words and his expressions as if it were yesterday. He said he had never once seen his friend absolutely speechless, without so much as a peep... white knuckles gripping his fishing rod as he nervously peered into the water and shook to his core. 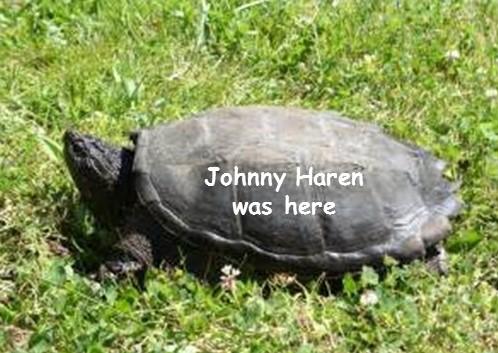 One and Multi-Dimensional Caster Diagram